Building on Quality Past Work!

Recently, we got a call from a former customer that we had helped with a home addition. We had planned on working with them as a bathroom remodeler when we were installing piping for the add-on to their home, but it became clear that it was not within their budget at the time. Now, the customers had gotten some extra income that they wanted to reinvest it in their home for added enjoyment and an increase in the overall value of their property. We were glad that they called us back for their North Oaks bathroom remodeling. We gave them a quote to change the look of the showers, bath, sinks, and the floors without much trouble, and they were very happy with our initial estimate.

We met with the homeowners to look over the bathroom spaces and to provide them with showers, bathtubs, and sink options. Once the homeowners selected the products that they wanted for their bathrooms, we gave them the estimate. It seemed that they were comfortable with the price, so then they scheduled the home remodeling project to begin on Monday morning. 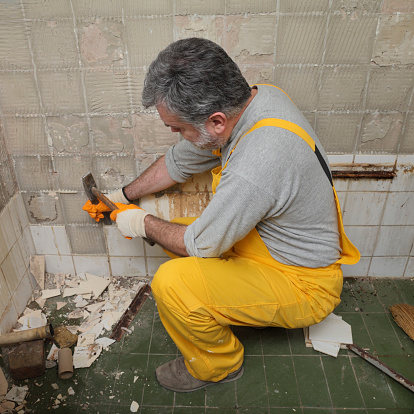 Our professional home remodeling crew arrived first thing Monday morning to start the bathroom demolition. The team removed the current bath and shower combo, sinks, and cabinets. The crew then removed all the floor tiles. The first step was to install the new shower and bathtub combo that the homeowners selected, then install the new vanity and cabinets for the bathrooms. The team returned each day and worked throughout the entire day.

The team installed the new floor tiles, then began to hang new drywall to start painting the walls. Once the painting was completed, the team installed the new sink and faucet, then added the mirror and all the trim in the bathroom. The team did this process with each bathroom until all the bathrooms in the home were remodeled. Once the last bathroom was finished and the team had the dumpster picked up, the crew let the homeowners know that all the remodeling was completed at their home and if they ran into any problems to just give us a call and we would be right out.

A few days later the customer called the office just to let us know that they were 100% thrilled with the bathroom remodeling that was performed by our courteous crew. The couple said that they couldn’t get over the added space and beauty that had been created, and the attention to detail that was provided made the couple very happy. They were glad that they had called our company to do further remodeling at their home. Our team went above and beyond to make sure the bathrooms were exactly like what they had requested in our first initial consultation, which is something we always strive to do.