His and Her Sinks are a Hit

We recently worked on a house doing some bathroom remodeling in Eden Prairie for a family that needed just a bit more space. The main problem the homeowners had was that there was only one sink in the bathroom. This had been fine when the couple had first bought the house, but now they were on very similar schedules and had children! They hadn’t realized how much it was affecting their daily lives until they had literally knocked heads one morning. During our initial consultation where we discussed their options for the renovation, they joked about how it was affecting their marriage. We assured them that our priority throughout the process would be to leave them with a newly renovated bathroom that would be functional, comfortable, and serve their needs.

We Started The Bathroom Remodeler Project

After discussing several option with the couple, they agreed that they simply needed separate sinks. Currently, the single sink was set into a long countertop at the center of a large vanity mirror. We knew from the get-go that it would be a simple task to install a new counter with room for two sinks. Our first task was removing the old sink, counter and cabinet. This was not a problem at all for our experienced team, and they were glad to be able to get into that area and do some re-sealing to protect from water damage. 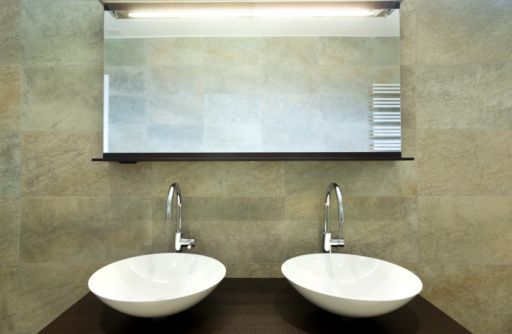 Once we were finished with that, our next task was to install new cabinets and counters with room for the two sinks. This did involve a bit of intensive plumbing work, but it was nothing we haven’t been able to handle before. One thing that our experience compelled us to raise to the customer was the lighting. They were very happy we though of this, because the current lighting would only illuminate half of each of the new sinks. We installed matching lights above each sink, with separate switches that each person could use. At this point it was only a matter of whose sink belonged to whom!

This was a straightforward job that really helped a family out, which is always a great thing to be a part of. The parents were really happy with out work the whole way through, and told us that they were considering getting a new shower installed in the bathroom. They also mentioned that they might need to have the same treatment done once their kids became teenagers. We told them that we would be able to help them with design and product ideas the next time they were thinking of getting work done. As usual, we were very happy to have delivered a great finished product to our client without exceeding the budget or getting behind schedule.