A couple called us asking for all sorts of different estimates for home additions, renovations, and basement finishing options. It seems they had been agonizing over buying a cabin for the last year, but decided it may be better to invest in improving their own home. We met with the couple and we helped them decide on a nice home addition in White Bear Lake that could support further recreation. After discussing everything from basement remodeling to updating their kitchens and bathrooms, they settled on one home remodeling project that made them really excited. We gave them some design options, and they settled on something rustic while still matching the rest of their existing home.

After they accepted our estimate for the whole project, we came out to their home again to begin the home addition. Our crew arrived the day the project was scheduled to begin. The crew started pouring a concrete slab where the new room would be located. The peripheral base was poured, and as soon as the concrete was cured the crew started building the exterior walls and framing the addition. The wall panels were installed and the crew then applied a house wrap on the outside of the wall panels. The crew then returned to start installing a roof on the addition. The electricity was installed, then the crew installed new windows. 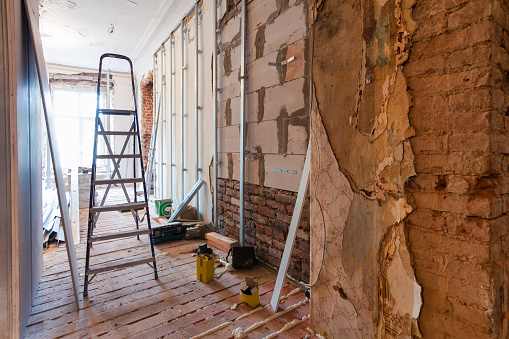 Each day the crew had a list of things that had to be done on that day, so the project would be completed on time for the homeowners. The crew added insulation between the studs in each of the walls, then they began to hang the drywall. The mudding was applied to the seams of the drywall, then the crew sanded down the seams, so the walls could be painted. Once all the painting was done, the crew installed new hardwood flooring. The final steps to the addition were adding the trim and the crown molding along with lights. It seems like the crew had the addition done in a couple of days, but it took the crew approximately two weeks to complete the project. Still, the whole thing was completed a week ahead of schedule.

The final step was the reveal to the homeowners. The crew had packed up all the tools and supplies and had the new addition spic and span. The homeowners arrived home at 4:30 pm and the crew walked them to the new room. The couple walked in and they said the room was absolutely beautiful. The couple said they couldn’t believe that their vision came to life in the room and they were very happy and pleased with the work that we had provided for them. The customers told us that our work was excellent, and gave many thanks to the crew. We tried out best to go above and beyond for our customer, and were very happy to be able to deliver a brand new space for them to enjoy.