We got a call from a homeowner moving into a fixer-upper, who needed some heavy-duty kitchen remodeling in Edina. They wanted to have a lot of work done in the home before they moved into it. We spent quite some time discussing the best strategy of how to get all the work done. Their plan was to get most of the kitchen done before going after the flooring, so that there wouldn’t be any needless traffic across a brand new floor. Before we got to work, the kitchen looked as if it had been originally from the 70’s. It had linoleum floors and lots of cabinet space at eye level. We were able to get rid of most of that and install some more space saving cabinets, along with an island with a sink in it. One of the things that stood out for this job was that there were exterior renovations happening at the same time. When we were notified that this would be the case, we could tell this homeowner meant business!

Our kitchen remodeler project had begun

We first went to work gutting the kitchen. We removed just about everything but some pipes in that space, then rebuilt about 30% of it, with the rest of it being some really great cabinets with racks inside. This would help a lot with storing lots of cooking tools, tabletop appliances and dishes. This really helped maximize the space, and with that opened up we were able to install a small walk-in pantry near the new space we were carving out for the refrigerator. 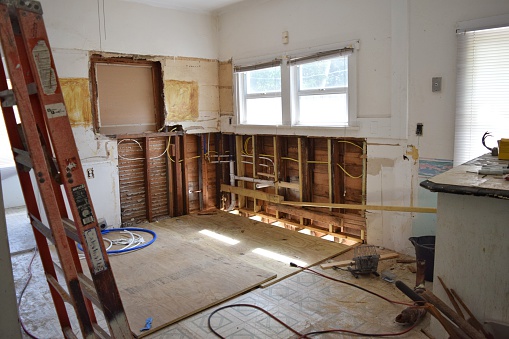 Once we had removed everything unnecessary and unwanted in the old kitchen, we got to work constructing the island. This was a very straightforward part of the project, as we have done many of these in the past. The homeowner would periodically check in on our work, and was very relieved that everything was going smoothly with both sides of the renovation.

The last parts of the job also went off without a hitch. Although this was one of our more intensive projects, it was no problem for us. After installing cabinets and plumbing, all that was left was to install the appliances and check for safety and fit. The client was very adamant on being able to fit a custom, professional grade range in place of the old, 4-burner electric one. She had made some really wise design choices during that stage of the process, as this cooking surface really became a handsome centerpiece for the kitchen. The homeowner was surprised that we had finished well before the crew doing the exterior of the home, as we had started a few days after them. We understand that different projects can be a completely different beast, but we were also glad to please a client with high expectations. The homeowner told us that she wanted to get most of the bathrooms and the basement completely redone. She also told us that she would definitely be calling us first for her future plans, and we certainly are looking forward to it!